’til the Love Runs Out

So...I went for a Doctor's appointment recently. It left me breathless.

Woke up to the tune of Eez-Eh at 5am, hopped on the train to Cardiff and as expected caught up with a couple of dozen fans waiting in the Hayes. It’s a beautiful morning.

Once the barriers were set up around the TARDIS we would wait for the next 3 hours or so. So far so good. What followed was the most surreal, dream-like experience – none of it felt real. We shared experiences and made each other guffaw with impressions. (In a Scottish burr) we had “all the tiiiiime in the worrrrrrrld!”

Oh hi Lizo! The press crews from BBC and ITN set up in the area, as the guests arrived from the Castle, slowly making their way through the red carpet. The event was surprisingly well-organised, no trouble caused, although reports say the guests were running late.

This bugger appeared out of nowhere. It stared menacingly at me. I hid behind my iPad, as it reached out and almost choked me. AHHH! AHHH! AHHH! MUMMY HELP! Just another day in Cardiff. 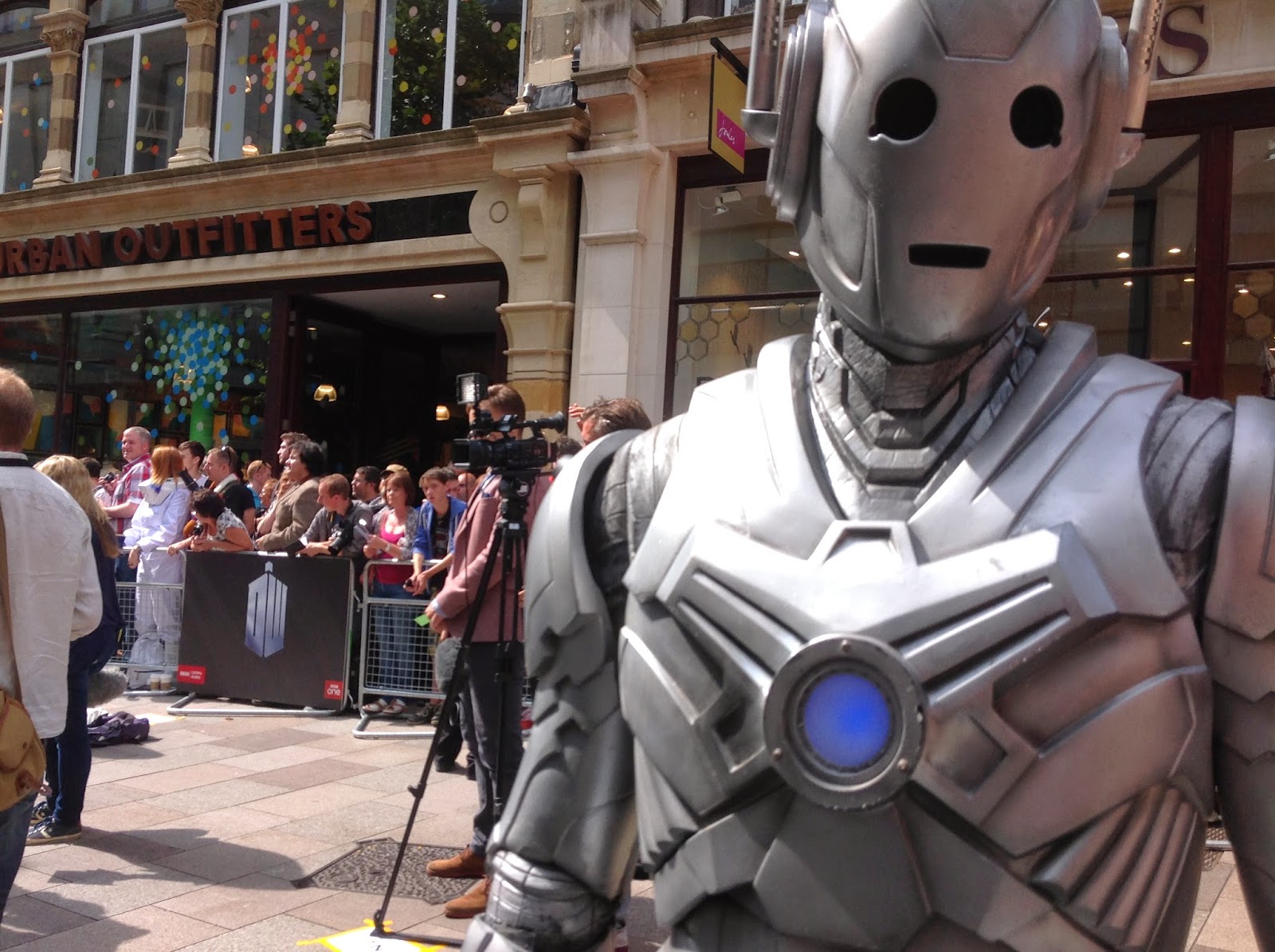 Then the Malcolm Tuckin’ Doctor came to the rescue. It took him 20 minutes or so but Who cares. He handled everything like a pro.

The episode got us all giddy with funny and creepy moments and a very different sort of energy to what we’re used to. The new Doctor is everything you expect and much much more. He’s a bad-ass, not the “bad guy” that Mum was fearing. No romantic tension between him and Clara but they’re going to go in an exciting direction. The opening titles were mind-blowing. A mix of classic and new.

I was the first person to join in the chat during the Q&A. A chance to say how it was great to see Jenna again, after bumping into her in London recently; (playfully) tell off the Moff for killing the dinosaur (cue awkwardness and face palm reaction – “WHICH ONE?”), and ask Peter if his Doctor often reflects on his past or is he more of a thrill seeker. He struggled to understand half of the question (extra giggle-worthy when you see Deep Breath), so I articulate, and he was charming and sweet in his answer.

“Anyone who has lived his life, he’s always going to be haunted and challenged. But he gets on with things.”

Life is complete. Everything is awesome etc. The person who recorded the conversation will be rewarded with a cwtch.

The panel was full of great, internet-breaking moments, notably the wee boy who asked for an autograph; a birthday singalong; a mic drop response of “Ancient Rome” and the reaction to a potential WhoLock crossover. The panel wrapped with what Peter would tell his younger self. All the feels.

Also met Samuel Anderson a couple of times. Charming guy who makes his debut as Danny Pink in ep 2.

A euphoric feeling I haven’t felt in months.

Afterwards I danced like Star-Lord around the city, singing 500 Miles and For the First Time in Forever, high-fiving random shoppers. Nooooooo regrets.

Imagine winning first prize three times in one day. We made it on to national news so make it four. No, five! We made so many new friends.

“Smile, and the world smiles with you.” ~Nana