Something Beautiful, Something Wonderful

At time of writing it had been four weeks since the fan event in London. Never have I felt more closer to this show, one that my parents watched when they were kids. My mother’s side of the family are from Glamorgan, where the production has been based for a decade.

A bit of background…

Dr Who and the Daleks and the 1996 pilot were the first time I was ever aware of the concept. I remembered the wobbly sets, the grandfatherly figure and his family, the time machine and the cone-shaped vacuum cleaners.Nine years later, the Revival fulfilled its promise, chiefly with the writing, the performances, echoes of the past and fresh new ideas. I’d keep up with the spin-offs and Classics. We started visiting Cardiff more often. The pickups in Coventry would be the closest that Doctor Who had ever come to the Midlands.
A show like Doctor Who inspires creativity. For instance weird mash-up videos like Lords of Happy Time was the antidote to the tearful Series 4 finale. The end of Russell and David’s tenures, among other things, led to the creation of Everybody’s Music.
Late 2013 reached a crescendo in the global celebration of the 50th anniversary. With the announcement of Peter Capaldi (how are they going to explain Pompeii and Children of Earth?), the specials and the profoundly moving An Adventure in Space and Time, it was a good year for fans.Some of us were lucky to step into Eleven’s TARDIS set at Roath Lock Studios. It gave me a sense that I was billions of miles away from home, yet I still felt at home.

Doctor Who has as much to do with escapism as it does with heritage. A few times a year we head to South Wales for short breaks to spend time with Nana because she’s awesome. Since graduating university to become a freelance artist, I journey there more often to see what’s occurin’ in Swansea and Cardiff. Cultural activities, networking opportunities, Verdi’s etc. Some of the locals would have inside knowledge on current shooting blocks.There’s also Aberavon Beach. Just a 10 minute walk from Nana’s house, everything you could possibly want on vacation is there. Eye Myles and I both agree that Franco’s make the best fish and chips in Port Talbot.
Summer arrived early in May of 2014, but back in England I was painstakingly animating a walk cycle demo reel. All work and no play…Mum broke the news, from Nana’s cleaner, that there had been filming at our favourite beach b’there. Of all places to see some lights-camera-action, though we never counted on it. Soon, things kind of hit a wall.

More crushing though was news of the fire that struck the Glasgow School of Art.

Capaldi, known for his fondness of it had studied there, graduating from Graphic Design. It was like he had lost something dear to him whilst in another country working, too. He addressed a beautiful message to the students who had lost their work. The thoughts of them and the message spurred me to help put the pieces back together.

The intention was to present to him a watercolour landscape of the beach scene. Through an online auction, fans would submit bids for the signed artwork, with all proceeds going to the Mackintosh Appeal/GSA Development Trust, towards its £20 million funding target. A la the stasis cube in DOTD, it would be called, “Lost in Sands of Time…No More”.

Aware of his busy schedule an immediate response to fan mail was not guaranteed. What was guaranteed was a public appearance during the UK leg of the just-announced World Tour. I held my breath for the longest time during the morning tickets went on sale. Imagine the relief when I managed to purchase a stall ticket. L row. Twelfth row.

Cardiff, 7th August: I arrived early to join a small crowd in the Hayes that grew. Exciting as it was, I knew I had to decide on a selfie OR quick-fire scribbles on the artwork. It was possible the latter would resurface in September when we would return to Wales for another vacation. Production would soon begin on the Christmas Special.

The themes of Series 8 resonated with me, besides…

Whilst other UK TV viewers were throwing tomatoes at X-Factor, we were drawn into stories that were scary, poignant, bonkers, ballsy, fluffy, and raised some broader issues. Listen and Flatline are firm favourites, along with some of the most beautiful imagery and character moments. I’m hoping we see how far Clara’s relationship with endearingly grumpy Twelve goes.

Didn’t I set a NY resolution to check under the bed…?
Prior to and during its 12-week run, I was trying to achieve balance in self-employment and family life, not unlike Clara’s. At times the show spoke directly to its audience:”Fear can make you stronger””Sometimes the only choices you have are bad ones. But you still have to choose””Be less scared, be more trusting”
Back in Leicester the watercolour painting was on display in Silver Arcade, part of the Knighton Lane Artists exhibition. Sadly I was unable to collect it in time for the next Wales vacation.The scenes in Kill the Moon prompted me to paint two more impressions.
Mid-Autumn was a stream of personal failures and financial stress. Confused and burdened I became increasingly fearful of the future. There is nothing I hate more than letting down the family.Fortunately, my friends at Seed Creativity were preparing a live social media project, aiming to spread the word about the UK Young Artists Festival around Leicester. Based at the Seed Creative Hub, it was a great way to make new friends and improve my marketing skills. Since then I was doing what I could to stay afloat, speaking to the right people etc.The story of an autistic boy coping with his grandmother’s passing thanks to a kind message sent by his hero lifted everyone’s spirits.

Shortly after that, a lady who I had met in Cardiff was among a random selection of folks who won a pair of tickets to the Series 8 DVD launch held in Soho. She was offering a spare invitation, which I accepted without hesitation.

This stroke of luck happened to fall on the same fateful evening as the break-in at Seed Creative Hub. Laptops, iMacs, hard drives, training equipment etc were stolen. But it wasn’t going to stop Dan, Jon, Richie or anyone from progressing.

I read all the messages of support from their followers, when it hit me. Things were about to come full circle. It made sense to give something back to the community and to those who helped kickstart my career.

17th November: The hellish Monday morning turned into an afternoon of pure magic. Elizabeth and myself – fully equipped with the watercolours – and a hundred other attendees were treated to a first look at Earth Conquest – a heartwarming documentary about the fandom. One thing I love about these events is meeting other fans and artists. They make it all possible.It was followed by a panel where Steven and the cast including Frank Skinner, Michelle Gomez and Samuel shared insights, amusing anecdotes and world exclusives. 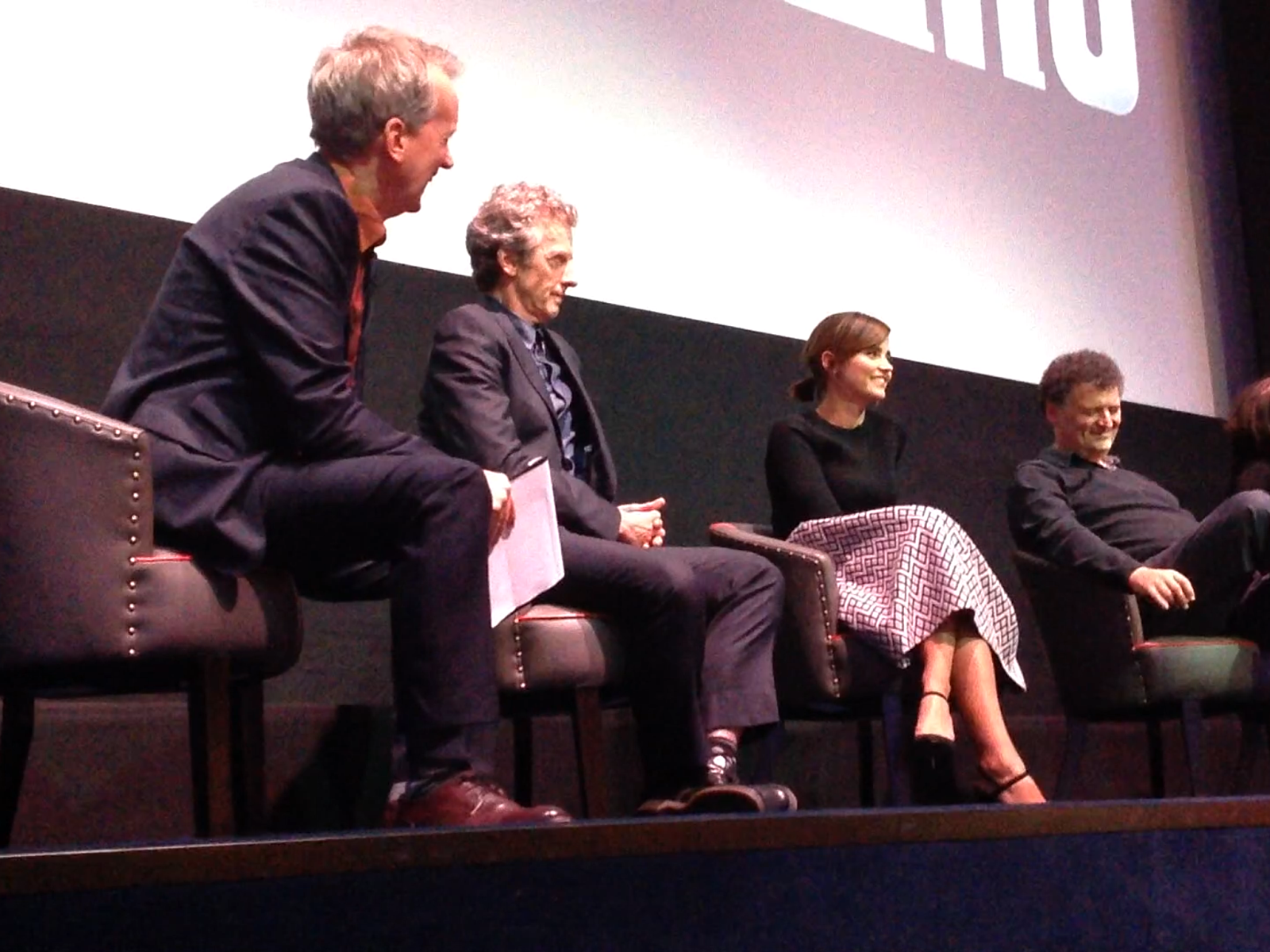 What made it extra special was the perfectly-timed clip from Kill the Moon. 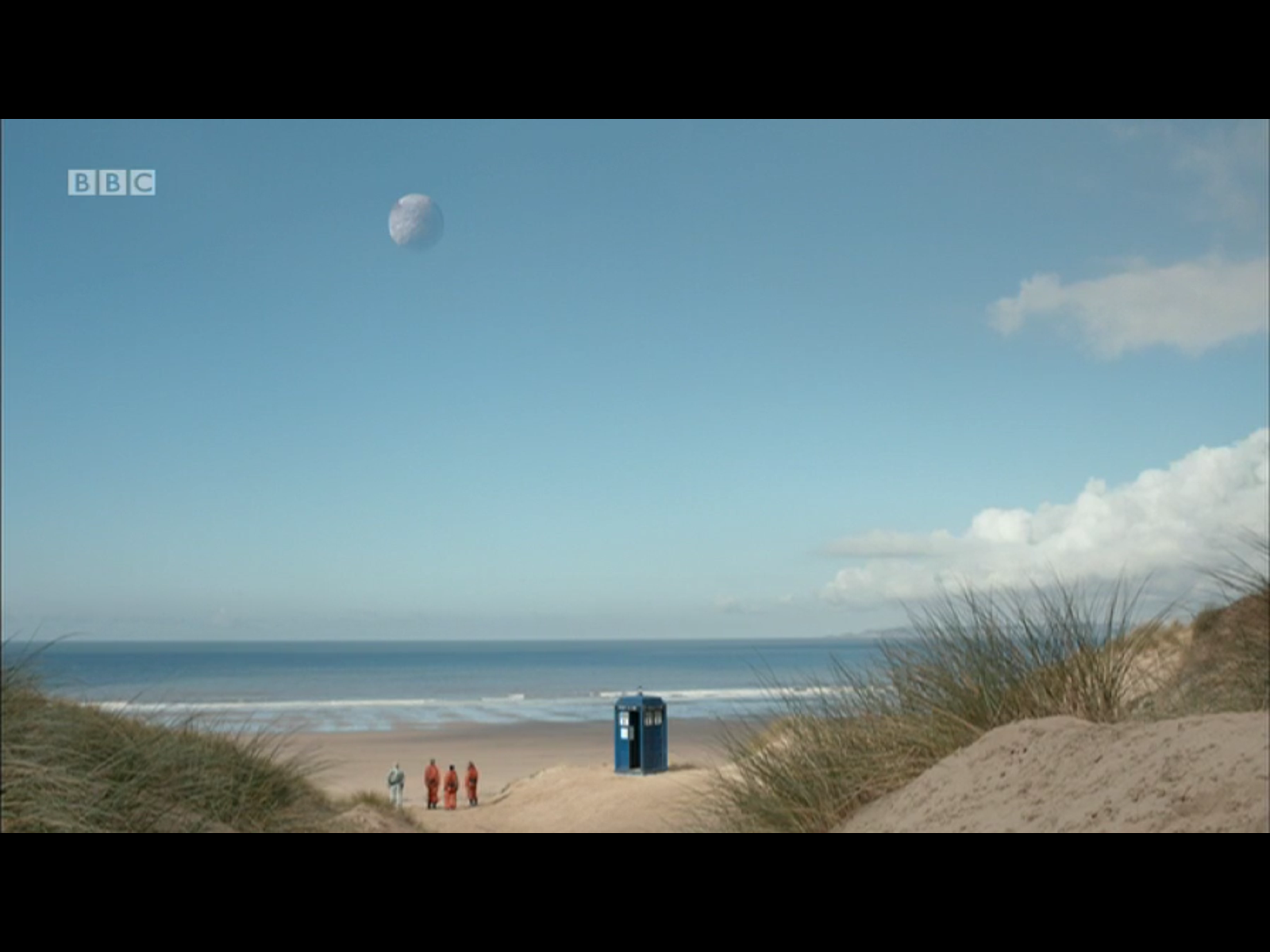 It was a real Cinema Paradiso moment. I stretched out my hand: that’s… our… beach b’there! No way could I pass up that opportunity to display the painting for the panel to see. Clara Oswald approved.

After the final applause, somebody called “we love you!” Everybody laughed and blushed, as Frank joked that I was his “ex-wife”.
So that concluded the panel. No meet-and-greet was happening in this room, we thought as we packed our bags. I turned 90 degrees… to find the Doctor materialising in front of me.
Holy Capaldi.
We shook hands many times, and I told him the show helped me through tough times which he was glad to hear. Our reunion was like that sequence in Spirited Away. “I knew you were good!”Half dazed/skittish I told him the two paintings that weren’t signed to Lucy were charity donations. He spoke his approval briefly as he was tending to other folks. 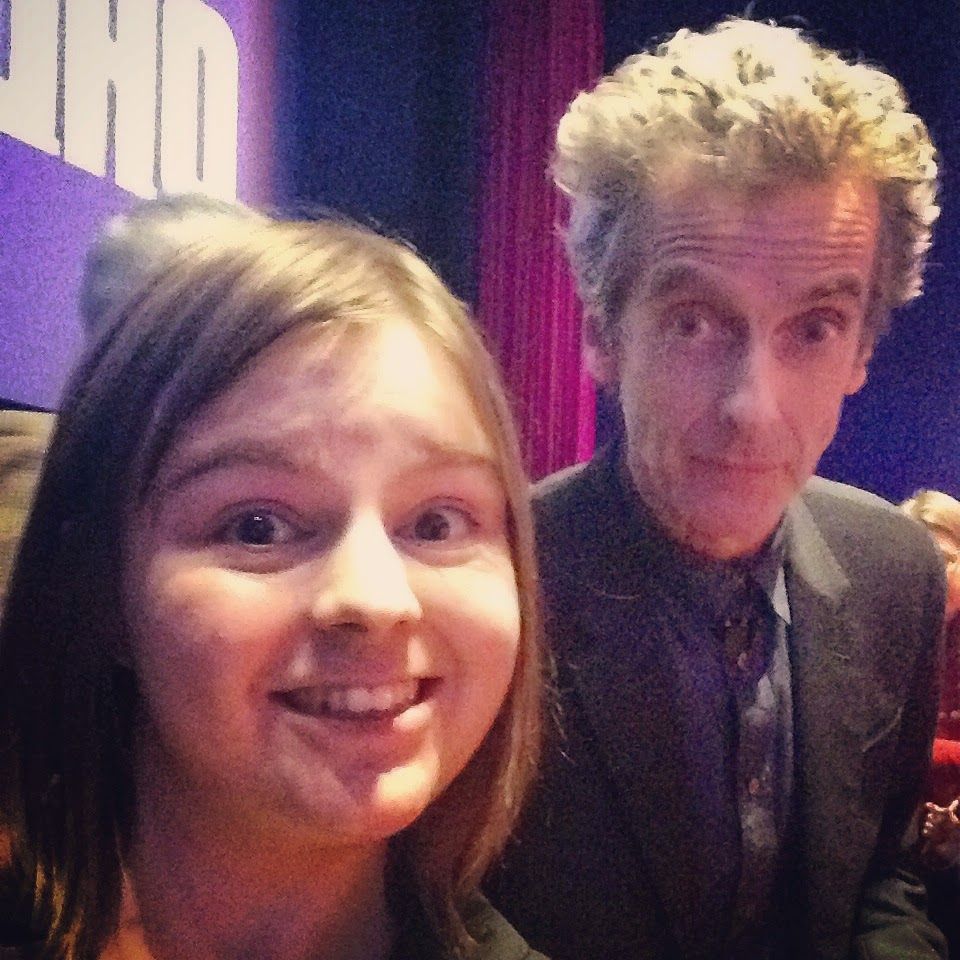 I hope I wasn’t taking up anyone’s space too much. If so, apologies for that. Peter caught me by surprise, graceful as he was. Despite the muddled interaction we all expressed our affection and thanks. And a cwtch! It certainly wasn’t the first time I hugged a Time Lord.

We had even more success in the bar. I managed to get Steven’s signature, telling him Series 8 was amazing and how excited I was for more Sherlock. Also, the Master is kind of adorable.

Now we can move on to eBay or other charity fundraising platforms… um, anyone know how to work this thing?

Helping the Doctor – that would be good. Doctor Who inspires us to do good.

Respectively, BBC Wales and Worldwide did an outstanding job on the show and marketing campaign. With the Revival’s 10th Anniversary, 2015 promises more unexpected magic moments, like making children’s wishes a reality. At the premiere it was kind of like the finale of E.T. for a small boy named Elliot.

Another example was forgetting we were in a theatre deep under the Ham Yard Hotel. The Doctor transported us to that moment on the sand dunes, watching a new moon forming in the clear blue sky above the sea. No matter how far-flung into the future it was meant to be, it felt like home again.