With Mission Dalek, filmmakers and visual artists were prompted to create their own Doctor Who story. Those* who demonstrated creativity, inventiveness and technical accomplishment the strongest would win a trip to Roath Lock Studios.

I kept having flashbacks to uni while working on my entry. Despite certain limitations I was able to tell a story, assembling all the scenes and title cards together into a neat 90 second package. I managed to fit all four clues into the piece, the main one being “Technical Transformation”. 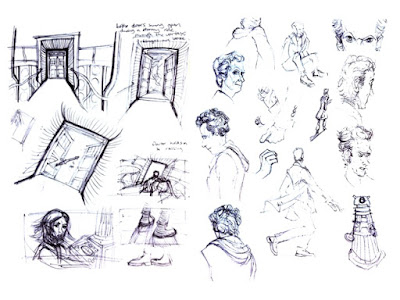 The process of designing the character/prop assets and animation in Toon Boom Harmony took 12 days. My lucky number. Much of the “budget” i.e. time was spent on story development and keeping the eyebrows/fluffy hair on model. Compositing and editing were done in Motion.
Whether or not it’s a hit with the judges, it was a lesson in decision-making and time-keeping. During this purely experimental exercise, I found I was able to get back into animation production. It felt tremendous. It has motivated me to make more little shorts with fuller character animation, without going overboard with story ideas that require more time and hands.
I am deeply thankful for the BBC for launching this. Maybe they’ll call me to do an animated spin-off series of the Twelfth Doctor’s adventures?
The project was finished in time for the deadline; what a relief it was to head down to Wales for a break. Mum could not have timed it better. 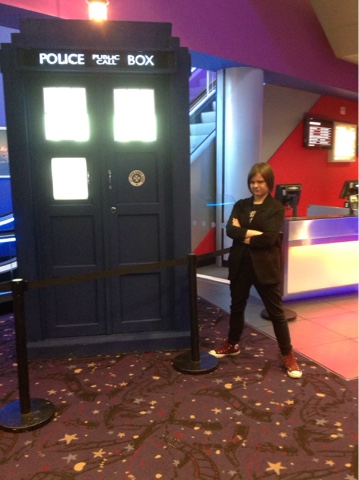 At Cardiff Cineworld, myself and pals attended the Series 9 Launch, watched two brand-new episodes back to back, reserved “for the Welsh”.
The chilling two-parter is both everything you love about and would not expect to see in Doctor Who. It’s like Empire Strikes Back or The Dark Knight. The Magician’s Apprentice grabs you and never lets go. Producer Brian Minchin told me afterwards that because of the reception of Dark Water/Death in Heaven, we’d get more two-parters, and viewers would have to wait for The Witch’s Familiar. Preparing popcorn for the reaction.
The Q and A session followed. Jason Mohammad was once again a great host. Questions from the audience and answers from the panel were entertaining as always, while spoilery details were kept close to the chest. Everyone was all in favour of David Bowie or Keith Richards making guest appearances, so what could go wrong with a full-on musical episode? “Anything is possible,” said Steven Moffat. Folks were divided, though.
The panel, also including Peter Capaldi and Jenna Coleman, thanked me for praising their performances and the episodes. But the night belonged to George Buckland, aka Mini Matt Smith. His moment that closed the panel was THE highlight.
The group picture was another lovely surprise. At this point I’m so used to rubbing shoulders with famous people that I forgot where I was and who I was standing next to.
Already feeling generous and Doctor-like from picking the best seats for some fellow Whovians (one of them’s an animator!) I directed Peter to peeps wanting to greet him before he shook my hand. I then asked him to sign a Gallifrey postcard dedicated to a friend back in Leicester.
The Doctor remembered me when I told him he made my birthday. “Oh! Delighted to see you again!”
Could I keep the momentum going with a trip into the TARDIS in two weeks?
Alas that trip wasn’t to be.
Good thing The Doctor’s Meditation was released. This is the prequel that was shot at Caerphilly Castle, and oddly enough had been screened exclusively in U.S. cinemas. It’s 6 minutes of comic brilliance. There’s a Waiting for Godot vibe about it. I’m hoping Bors is the new companion.
Now where was I…
The winning Mission Dalek entries ranged from excellent presentation, atmosphere, clever twists, to WHAT are they cereal. “Step Forward” was inspired by a true story. It was one that lent itself to the animation medium. Losing sleep and summer walks, I climbed a mountain with this one.
In the latest Radio Times, Peter taps into the positives of failure:
“All actors go through ups and downs and walk in the deep shadow of failure. I like to talk about it, unlike most who think it means you’re not successful. My failures taught me more than any success and made me wise. […] There are lots of high priests, Aztecs, in this business, who profess to have the answers. When you realise they don’t, it’s a remarkable feeling.”**

It’s basically “failing better”, as Benedict Cumberbatch once told me. And I also have to remember one thing – Peter Capaldi said my art is fantastic. And that transported me to Comic Con. Thanks to these cats, among others, I will continue to become a better communicator. Written, verbal, visual. I just have to keep it simple. I’m still only a baby.

*The competition was aimed at UK residents